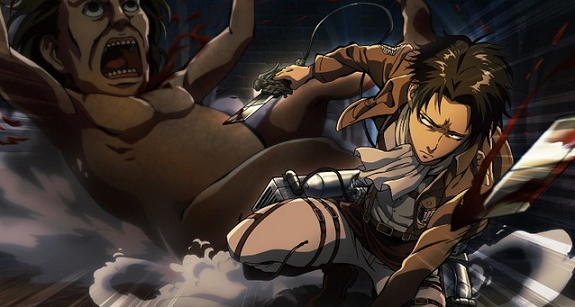 Attack on Titan (also known as Shingeki no Kyojin) is a popular manga by Hajime Isayama, which received an anime adaptation back in 2004. It even got several video games, including one on Nintendo 3DS called Attack on Titan: Humanity in Chains (developed by Spike-Chunsoft, and published by Atlus USA in Europe and North America).

And today, early leaks from Famitsu reveal that a second Attack on Titan game is coming to the Nintendo 3DS. This time developed by Ruby Party and published by Koei-Tecmo (who also published the latest game, on Sony platforms), it’s not an action game but… an Adventure game (not surprising, since the developers are known for their Neoromance / Otome titles).

This new game is called Shingeki no Kyojin: Shichi Kara no Dasshutsu (lit. Attack on Titan: Escape from the Jaws of Death), and it will be released in 2017 in Japan (development is 30% complete, according to Famitsu). It will feature an original story, set before the first encounter with the Female Titan.

You get to play as an original character, who belongs in the Survey Corps. You can chose to play either as a male or female character, and who you’re paired with changes depending on that choice:

It all begins with you being stranged in an old castle, after losing all your equipment. Together with various famous characters from the Attack on Titan series, you have to find a way to escape.

Here’s the very first screenshots for the game:

Attack on Titan: Shichi Kara no Dasshutsu (3DS) comes out in 2017 in Japan. Our Upcoming Releases page has been updated!