Earlier this month, we got lots of information about Dai Gyakuten Saiban: Naruhodou Ryuunosuke (first game in a new Ace Attorney series) thanks to Famitsu magazine. One of the things revealed was the Prosecutor, but transliterating his name was rather difficult (with several possibilities for the spelling).

But today, thanks to some official merchandise sold by CaféReo, we now have the official spelling for the new Prosecutor’s name: it’s Baroque Bangieks (pronounced “Ban-jeeks”). 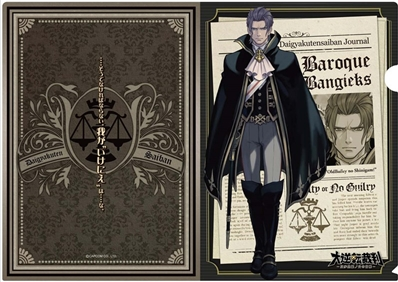 Here’s some pictures of the goodies (badges and clear files):

Dai Gyakuten Saiban: Naruhodou Ryuunosuke no Bouken (3DS) comes out on July 9th in Japan. It will be playable during NicoNico Choukaigi this week-end, where it will get several events.