The Legend of Zelda: Twilight Princess HD comes out in less than three weeks, and Nintendo has started promoting the game with some commercials. Unfortunately, it looks like the game isn’t going to get any on TV, only on the internet.

The three web commercials below show gameplay footage from the game, along with some story cutscenes. It reveals that the game has sold over 8.85 million copies worldwide, on both the Wii and the GameCube.

Head after the break for the other two commercials, and the rest of this post!

As spotted by NintendoHall, Nintendo is offering some bonus content for Hyrule Warriors Legends in Italy. If you pre-order the game at select retailers, you will get a Classic Link costume set (the same as the bonus that came with the New Nintendo 3DS XL – Hyrule Edition console in Japan), but also a costume for My Fairy, based on The Legend of Zelda: Twilight Princess HD. 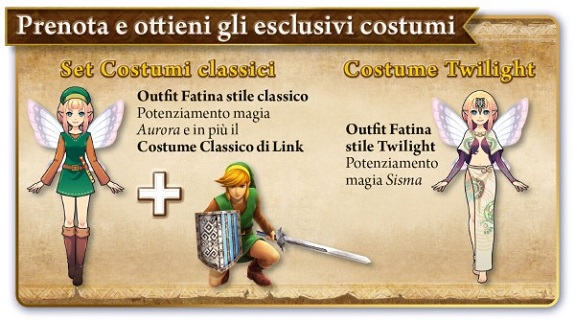 The participating retailers are:

The Legend of Zelda: Twilight Princess HD comes out on March 4th in Europe and North America (March 10th in Japan), and on the same day, the Wolf Link amiibo will be released. If you were wondering if it would unlock a special costume in Super Mario Maker, you need not wonder anymore: the answer is yes!

For those who don’t want to buy the amiibo, Nintendo will most likely release an Event Course next week, to celebrate the release of The Legend of Zelda: Twilight Princess HD.