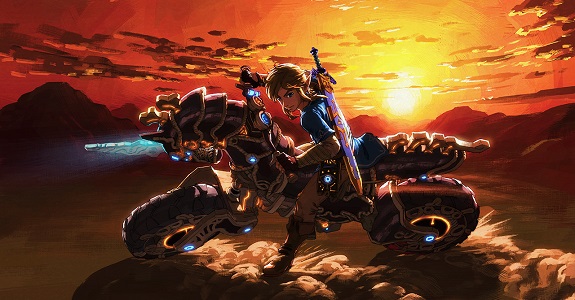 Earlier today, Nintendo released a brand new update for The Legend of Zelda: Breath of the Wild. It includes various gameplay fixes, but most importantly, it adds the contents of the second DLC: The Champions’ Ballad (check out for this post for all you need to know about it).

Following that release, Eiji Aonuma posted a blog post on the official Zelda portal in Japan, explaining why Link was given an actual motorbike. But first, some words about The Game Awards.

As you probably already know, The Legend of Zelda: Breath of the Wild won the Game of the Year award. As you can imagine, Eiji Aonuma is pretty happy about that, and he explains that it’s because people from all around the world have been enjoying the game since launch that it’s been able to win so many awards. You can be sure the development team is pretty pleased to see so many people enjoying the game they made!

Back to the DLC: as mentioned above, you can find all there is to know about it in this post. But there’s one point in particular Eiji Aonuma wanted to talk about: the infamous Master Cycle Zero… the motorbike. You get it by clearing the Divine Beast Tamer’s Trial.

Many fans were pretty surprised by that addition: after all, a motorbike is definitely not something you would expect to find in a Zelda game (granted, there’s one in Mario Kart 8 / Deluxe, but that’s not a Zelda game!). You’re most likely wondering why such a vehicle was added to The Legend of Zelda: Breath of the Wild in the first place, and that’s precisely what Eiji Aonuma wanted to explain with that blog post.

That motorbike is actually something he’s been thinking about for a long time. After all, the 4 Champions all have a pretty reliable “companion”: the Divine Beasts. But Link, the Hylian Champion, had nothing…

That’s how he came up with that seemingly crazy idea: give Link a motorbike, something that was actually made using the technology of the ancient Sheikah civilisation (just like all the seemingly high-tech things in the game, starting with the Sheikah Slate). He tried to see how far they could go with that idea, and you can check out the results in the DLC released today!

The Master Cycle Zero is pretty much a Trail Bike. You can do some pretty neat things with it, such as jumping, climbing up rocky slopes, and more. It actually requires fuel, but you can use the same ingredients as regular cooking. Eiji Aonuma is interested in seeing just how far players will be able to go with the bike.

When riding the Master Cycle Zero, even if you go at full speed, you can make some pretty sharp turns. This allows you to use it in battle, and in fact, Eiji Aonuma encourages players to try it out against tough enemies such as a Guardian or a Lynel… bet they won’t see THAT coming!

Check out this post for Part 1 of an interview with Eiji Aonuma and Hidemaro Fujibayashi about the DLC!