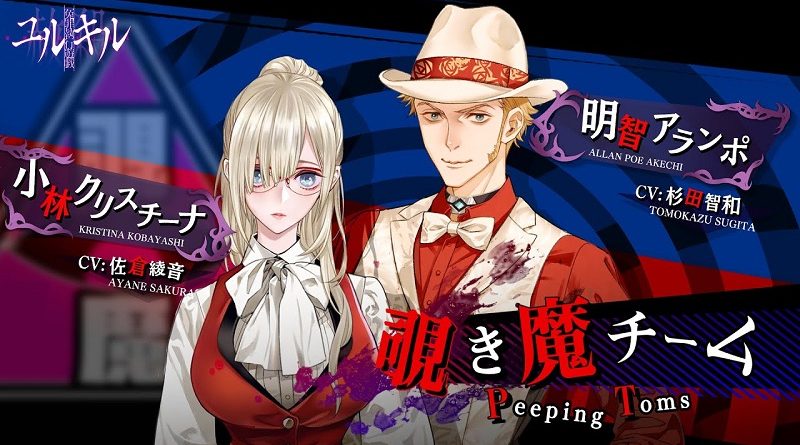 Next Spring, IzanagiGames will release Yurukill: The Calumniation Games on Nintendo Switch. It’s a unique combination of an escape room adventure game with bullet hell shoot ’em up gameplay.

And earlier this week, IzanagiGames started sharing some character trailers for the game. They will be added to this post as soon as they’re releasing, so keep checking back!

He is sociable and considerate. He has protested his innocence for over 10 years, and vows to emerge from the Yurukil Games victorious with his teammate, Rina.

Rina is strikingly pretty but has trouble expressing herself, and is brusque and cold to everyone she meets. She often shows extraordinary hatred towards Sengoku. Her reasons for taking part in the Yurukill Games are unknown.

Binko is Yurukill Land’s kimono-clad, mask-wearing guide. She is polite, and old-fashioned in her speech, yet when dealing with the Prisoners, she’s sharp-tongued and quick to ridicule. Variations of the phrase, “bin-bin,” are her trademark. Under the auspices of Yurukill Inc., she oversees the games offering the Prisoners a chance for acquittal at Yurukill Land.

Futa is the eldest of twins found guilty of a robbery-murder case. He may seem blunt and prone to violence, but he also has a kind, caring side. Before starting high school, he was sent to a youth detention center after a violent outburst. Since then he has been estranged from his younger brother. He insists he is innocent and intends to win the Yurukill Games along with his twin.

Raita is the younger of twins found guilty of a robbery-murder case. In contrast to his older brother who easily gets upset, he is calm and gentle. Before being imprisoned, he was a top-flight company employee. He claims that he was falsely accused and intends to win the Yurukill Games together with his twin.

Kagura is a seemingly trashy teen with a penchant for slang. Even after learning that the Prisoners, Futa and Raita, have been convicted of murder, she doesn’t seem to care. She is a cheerful and laid-back girl. She says that she’s taking part in the Yurukill Games to get rich.

Gentoku is the son of Yurukill, Inc.’s CEO. He feigns being mild-mannered, but inside is malicious, cold-hearted, and abusive. He’s unable to suppress his instinctive “tut” whenever he gets annoyed. He’s taking part in the Yurukill Games as part of a deal with his father.

Izane works for Yurukill, Inc. as Gentoku’s chaperone. She is mysterious and doesn’t leave much of an impression, and it’s difficult to tell how old she is. You could say she was in her teens or in her thirties and no-one would bat an eyelid. She is extremely timid, and prone to bouts of sobbing. Yet she sometimes makes sly remarks to her teammate, Gentoku.

Hanaka is an underground pop star imprisoned for a particularly sensational incident. She’s sweet and genuine, and cares about her fans. She knew her teammate Oka before taking part in the Yurukill Games. The other participants often don’t know what to make of the pair’s unique, energetic interactions.

Keiichi is a diehard fan still devoted to Hanaka despite her serving a prison sentence. He is easily excitable when it comes to Hanaka, but gentlemanly, and respectful of the distance between fan and pop star. He is taking part in the Yurukill Games to help Hanaka prove her innocence.

Private detective, alias: Allan Poe Akechi. He claims to be a talented investigator, but his powers of deduction are somewhat questionable. Apparently, he was arrested for peeping during an investigation and claims to be falsely accused. His real name is Benitaro Barahabara.

Kristina Kobayashi is a private detective and works as her brother’s assistant. He refers to her as “Young Kobayashi,” and she has a lot of love and respect for him. She supports Allan Poe with all her heart whenever he’s in need. Her real name is Beniko Barahabara.

And here’s some details about the game, along with a partial list of people working on it:

An escape adventure and bullet hell shoot ‘em up game based on an original story by Kakegurui – Compulsive Gambler author, Homura Kawamoto, with a scenario by his younger brother, Hikaru Muno. Features character design from Hiro Kiyohara, known for his work on Valkyria Revolution, and a soundtrack from Yuko Komiyama, who worked on the Monster Hunter series. The shoot ‘em up elements were developed by veteran studio, G.Rev.

Yurukill: The Calumniation Games (Switch) does not have a release date yet, but is slated for a Spring 2022 release worldwide.