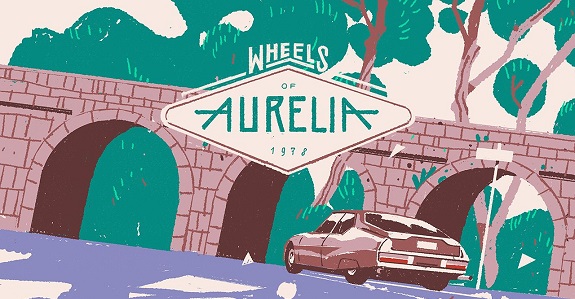 Back in August, Mixed Bag Games announced they were brining Wheels of Aurelia to the Nintendo Switch. For those who never heard of the game (and didn’t click on the link at the beginning of this post!), it’s a unique game bringing together the Visual Novel and driving game genres together.

It’s been more than two months since that intial announcement, but Mixed Bag Games finally has some good news for (patient) players: Wheels of Aurelia will be released soon… next week, in fact! On November 2nd, the game will be released on the Nintendo eShop in Europe and North America, where it will cost 9.99$ / 9.99€.

Wheels of Aurelia has you embark on a road trip through the western coast of Italy, in the 1970’s. You play as Lella: a bold and spunky woman, whose past is yours to discover. The game offers a cast of dynamic characters, that you get to meet during your multiple playthroughs.

Because yes, the game has been designed to be played several times: each playthrough actually lasts about 15 minutes. There’s no less than 16 different endings to discover, depending on the choice you make during your journey.

Here’s the launch trailer for Wheels of Aurelia on Nintendo Switch:

Wheels of Aurelia (Switch – eShop) comes out on November 2nd in Europe and North America. The Upcoming Games page has been updated!