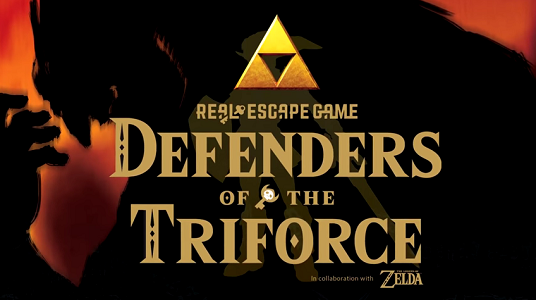 One of the main elements of most The Legend of Zelda games, besides exploration and battles, is obviously the puzzles. The various dungeons of each game are filled with them, and their complexity varies depending on how far along you are in the game. Ever dreamed of tackling such puzzles in real life? You will soon be able to, starting next year!

Today, Nintendo announced a partnership with SCRAP, who make Real Escape Games (they previously made one for the Zero Escape series). Next year, fans in the United Statates will be able to discover Defenders of the Triforce, a “unique multi-city Puzzle Tour” inspired by the Legend of Zelda series.

But as opposed to other Real Escape Games, Defenders of the Triforce is not really about escaping rooms… it’s all about puzzles! 6 players team up in order to solve them within the allocated time. The game takes place in a “huge area”, and allows fans to interact with “classic items and characters” such as the Goron, Zora, and Kokiri tribes. Naturally, the items discovered are used to solve puzzles, and move to the next areas.

Once the main experience is over, players will be able to take special pictures, but also purchase some exclusive merchandise.

Defenders of the Triforce will tour across the United States, and will stop at the following cities:

(Unfortunately, we don’t know if there will any date outside the United States).

Here’s a trailer for Defenders of the Triforce:

For more details, make sure to check out the official website: that’s where you can find additional details about Defenders of the Triforce (including details on tickets, a Q&A, and more).