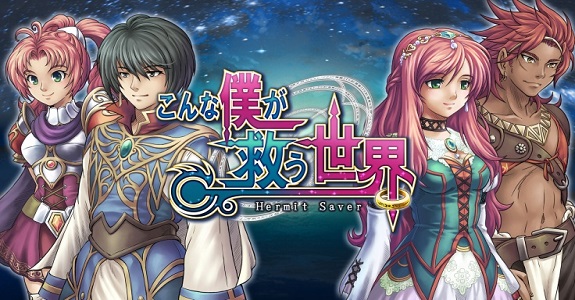 Last week, we learned from Nintendo of America’s website that Unlucky Mage would be Exe-Create / Kemco’s latest JRPG to be published in English on the Nintendo 3DS. It was originally released as Unlukcy Hero on smart devices. But unlike the previous titles, this one wasn’t available in Japan yet.

Well, it turns out that Unlucky Mage will be released next week in Japan (one week before North America), where it will be known as Konna Boku ga Sukuu Sekai: Hermit Saver. Here’s some extra details about it:

And here’s some screenshots from the Japanese version of the game:

In case you missed our previous post, here’s the official synopsis (in English):

From loner to savior of a nation?

But that all begins to change when an untrusting young mage named Jasper, living isolated from society, finds himself involved in a chain of events that is sure to go down in history as the greatest story ever told!

With a plot full of twists and turns, Unlucky Mage will have gamers on their toes trying to outsmart foes using formations and tactics in this unique turn-based RPG! Now get ready to sally forth with Jasper as he goes from zero to hero in this comical adventure that is sure to delight fans of fantasy RPGs everywhere!

Unlucky Mage (3DS eShop) will be released on October 19th in Japan, and October 27th in North America. Europe will most likely get it on the same day as North America, but nothing has been announced so far.