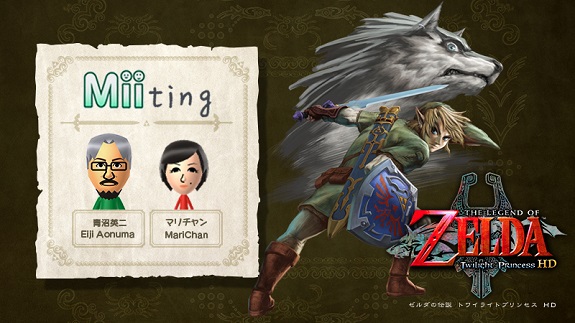 Yesterday, MariChan held another Miiting interview over on Miiverse. This time, it was Eiji Aonuma’s turn to answer plenty of questions, about The Legend of Zelda: Twilight Princess HD to be more precise. If you’re interested in reading the full thing, you can do so by clicking here!

Here’s some of the highlights from this Miiting:

Here’s some concept-art he shared for Wolf Link and Midna:

Make sure to click here in order to read the full thing!

Finally, here’s two videos for The Legend of Zelda: Twilight Princess HD, from Nintendo of Europe and Nintendo of America:

When did you first lift the Master Sword? #Zeldahttps://t.co/7w0jGCE4i5

Head after the break for the second one!

“No offense to Link, but why couldn’t I ride through Hyrule on one of these cute puppies?” –Midnahttps://t.co/lwiZj498bo