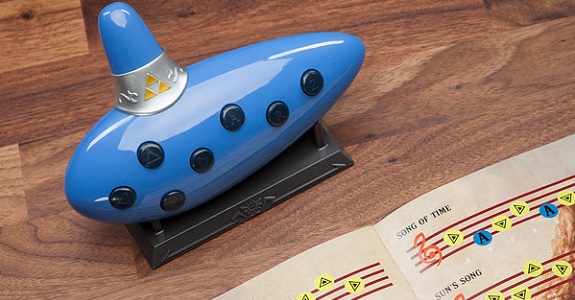 The Ocarina of Time is most definitely the most iconic element from The Legend of Zelda: Ocarina of Time… which is no wonder, since it’s mentioned in the very title of the game! In fact, there’s already been a fair bit of merchandise related to that ocarina, and more precisely replicas of the instrument.

Those make for great collector’s items, but unless you know how to play the ocarina, it’s all it’s ever going to be. For those who want to play it like a pro, but don’t want to learn how, ThinkGeek has the right thing for you… an electronic ocarina!

This electronic ocarina has two modes: one where you have to play the corresponding buttons to play the tunes from the game, and one where you’re free to play whatever you want. It’s more a toy than a collector’s item, but it still would make for a neat present at Christmas for example.

And here’s some pictures for this electronic Ocarina of Time

This Legend of Zelda: Electronic Ocarina of Time will be released in October, and costs $29.99.