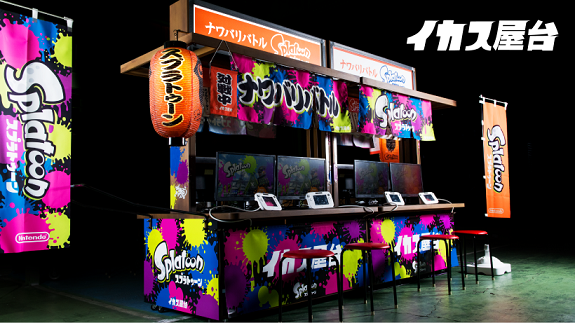 Today, Nintendo announced that there would be nation-wide tour for Splatoon, which will be playable at various shopping malls on May 5th, June 12th, and in July, August, September and October. Players will be able to enjoy local 4 vs 4 battles thanks a special stand designed after a traditional Japanese food stall (which wasn’t an April Fool’s after all!).

Here’s some pictures of the “food” stall (which only servers…. weapons!):

Next, here’s pic of various Splatoon goodies from Banpresto, which will be available in June in Japan:

Also, here’s some goodies that visitors will be able to get from Nintendo’s stand at the NicoNico Choukaigi event tomorrow and on Saturday:

Visitors will also be able to take pictures with a Splatoon background: