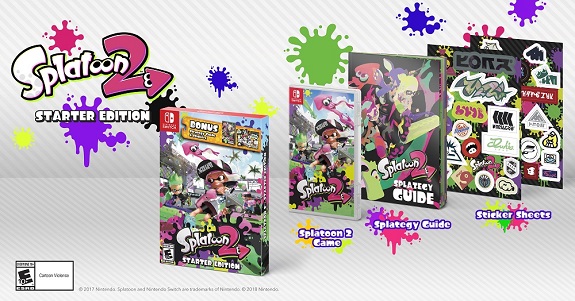 Last year, in November, Nintendo released a special edition of The Legend of Zelda: Breath of the Wild in North America and Japan, called “Explorer’s Edition“. It includes the game, a 100-page guide book, and a map. And today, Nintendo announced that a similar edition for Splatoon 2 would be released next month in North America: the Splatoon 2 Starter Edition.

Just like the Explorer’s Edition for The Legend of Zelda: Breath of the Wild, it includes the game and a guidebook, but it comes with two sheets of stickers instead of the double-sided map… not a surprise, since Splatoon 2 doesn’t have a map (and doesn’t really need one to begin with).

This Starter Edition will be sold $59.99, which is the regular price for Splatoon 2. In other words, for the same price as the game itself, new players can get the game AND some extras!

Here’s what the contents of the Starter Pack look like:

But that’s not all: the press release from Nintendo confirms that the Pearl and Marina amiibo, announced yesterday during the Splatoon Koshien 2018 finale, will be sold as a dual-pack in the United States. We already knew that it would be the case in Canada, but it wasn’t clear whether the US would get the figures separately or not.

Speaking of the Pearl and Marina amiibo, here’s a couple of pictures:

The Splatoon 2 Starter Edition (Switch) comes out on March 16th in North America. The Pearl and Marina amiibo do not have a release date yet. The Upcoming Games page has been updated!