Last week, Koei-Tecmo confirmed that Samurai Warriors Chronicles 3 would come out in the West next month (June 24th in Europe and June 30th in North America), exclusively on the Nintendo eShop. Earlier this week, the company revealed the very first trailer and screenshots from the English version, that can be found in this post.

But there’s one point Koei-Tecmo remained silent about: the Hyrule Warriors costumes (Link and Zelda), which can be unlocked in the Japanese version thanks to the demo. Unfortunately, the company confirmed to Siliconera that those costumes wouldn’t be available in the European and North American versions of Samurai Warriors Chronicles 3.

Unfortunately, Koei-Tecmo didn’t explain why those costumes wouldn’t be released in the West. 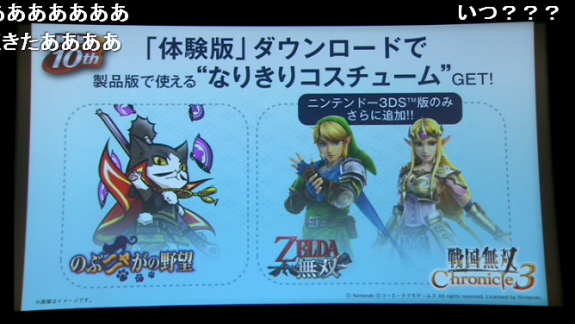