Rodea: The Sky Soldier came out yesterday in Japan, and what better way to celebrate than with a release date for Europe and North America? Well, that’s exactly what NIS America announced yesterday evening (it could have been a Nintendo Direct announcement, but it wasn’t for some reason).

Rodea: The Sky Soldier will come out on:

Back when NIS America announced that Rodea: The Sky Soldier was coming to North America and Europe, they told fans that it would be this Fall… they certainly weren’t joking! And a reminder for players interested in the Wii version of the game: it will be included as a first-print bonus with the Wii U version at certain retailers (like Amazon or Gamestop). Finally, we still don’t know if/when the demo will be released in the west. 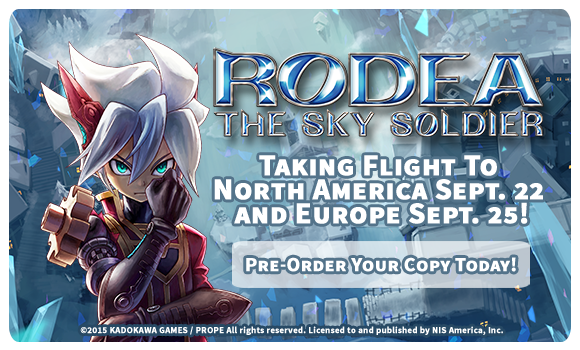 Rodea: The Sky Soldier (Wii U / Nintendo 3DS) comes out on September 22nd in North America and September 25th in Europe.