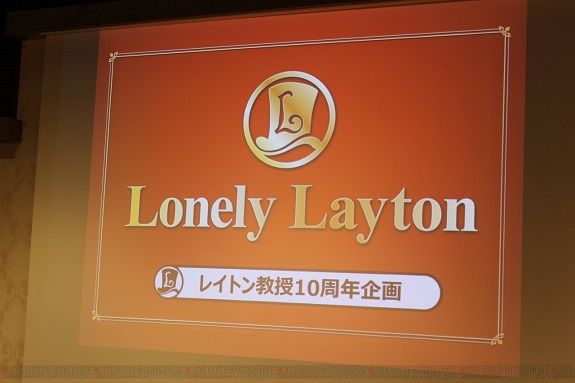 Yesterday was February 15th, 2017, and exactly 10 years ago, the very first Professor Layton game was released (on Nintendo DS). To celebrate, Level-5 held an impromptu event in Tokyo. It all started with a strange series of tweets between Akihiro Hino (CEO of Level-5) and a mysterious “Lonely Layton”.

I haven't really forgotten! It's the 10th anniversary of the Professor Layton series! Join me for tea to celebrate, English gent style! https://t.co/CZhCCkbprb

The two gentlemen then met in a café:

But it looks like they did more than drink tea together… they also went somewhere for dinner:

After that, they invited fans for an impromptu event at the Dad Bod Café. Here’s the pictures Akihiro Hino shared on Twitter:

And here’s the final picture that was shared on Twitter:

What a lovely picture of my daughter, Katrielle, and me on the cake! Thanks to everyone who sent me a message. I really do appreciate it. pic.twitter.com/uGt5ivgQg0

Here's to the last ten years of Professor Layton! And the Layton family will return. Look out for the all-new Lady Layton games coming soon! https://t.co/jHTNt7mqJH

If you thought that Lady Layton: The Millionaire Ariadone’s Conspiracy was a stand-alone thing, you were wrong (though obviously, we don’t know yet how the other Lady Layton game will be connected to that one).

By the way, if you want to send a special message for the 10th Anniversary of the Professor Layton series, you can do so on Twitter using the #lonelylayton hashtag!

Finally, here’s plenty of pictures of the event, courtesy of Dengeki:

Lady Layton: The Millionaire’s Ariadone’s Conspiracy (3DS) will be released this Spring in Japan, and at a later date in Europe and North America.