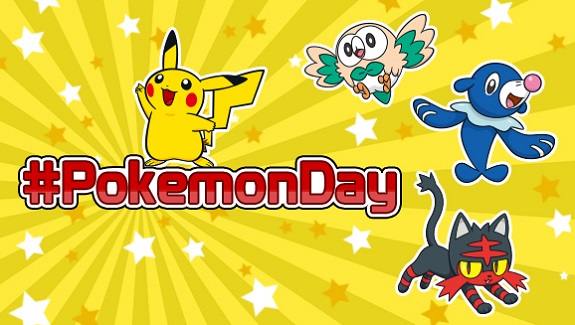 February 26th is Pokémon Day, and this year, the franchise is celebrating its 21st Anniversary. This year, The Pokémon Company has prepared several events and activities to celebrate:

From February 26th (1PM PT / 4PM ET / 9PM GMT / 10PM CET / 6AM Day +1 JST), all the Pikachu encountered in the wild will be wearing a festive party hat. Just like the speciak Pikachu with the Santa hat, it will keep that hat forever.

More figures will be released throughout the year, too.

Starting from Pokémon Day, the following movies will be available on Pokémon TV:

Also, the following will be added to iTunes, the Play Store, and Amazon Video on February 27th:

Starting today, players can get the following in Pokémon Trading Card Game Online:

On Pokémon Day, The Pokémon Company will stream the following over at their Twitch channel: the “most memorable matches from the Pokémon TCG, video games, and Pokkén Tournament from the past several years”.

The Pokémon Sun and Moon Gaming Lounge will be open at the Nintendo NY Store from 1PM to 3PM:

In celebration of #PokemonDay, hang out with us from 1PM-3PM on 2/26 in our #PokemonSunMoon gaming lounge at #NintendoNYC. pic.twitter.com/938Q1Upmsb

Here’s a video for Pokémon Ga-Olé on Arcade, courtesy of CoroCoro magazine: