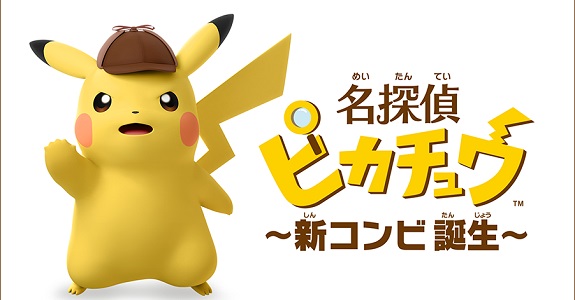 Today’s Pokémon news: some news about Detective Pikachu, but also…

This week, we got some interesting tidbits about Detective Pikachu. First, the movie: it will open on May 10th in the United States (and other countries). More details will be shared at a later date.

As for the game, it looks like a localisation is happening after all.

Unfortunately, that’s all we know about the western release of the game. However, given how much time has passed since the release of the first Episode in Japan, it’s safe to assume there will not be an episodic release in Europe and North America, and all episodes will be available as a retail package at launch.

Of course, we will have to wait for the official announcement before we find out how Nintendo is planning to release Detective Pikachu outside Japan.

Today, the second Global Mission for Pokémon Ultra Sun and Ultra Moon went live, and it’s called “Have Fun Mantine Surfing”. Here’s all you need to know about it:

More details about current and upcoming Global Missions can be found on this page!

Yesterday, the first trailer for the next Pokémon movie (which doesn’t have a title yet, just “Pokémon The Movie 2018”) was revealed:

As usual, the movie will open in July in Japan, on July 13th to be precise (with the western release following a few months later). This time around, animation will be done by OLM and WIT Studio, a first for the series. Unfortunately, that’s pretty much all we know about the movie for now, but more details are expected to drop sometime next year.