Today (August 19th), during the opening ceremony of the Pokémon World Championships, some announcements were made. One of them is for Pokémon Sun and Moon, with a new Pokémon revealed. Check out below for details, artworks, trailer, and a couple of videos!

First, here’s the new trailer for Pokémon Sun and Moon. It showcases Crabrawler, revealed today, along with Stufful, Palossand, and Sandygast (previously seen in CoroCoro magazine):

And here’s the recording of Junichi Masuda’s speech, where he talks about Crabrawler (the video also features a special video for Crabrawler, separate from the trailer above): 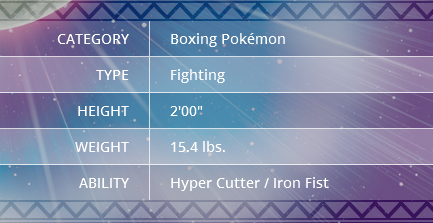 Crabrawler has a personality that really hates to lose, and it’s driven not only to aim for a higher position than its fellows in terms of social standing, but literally to aim for a higher position in the landscape. Perhaps as a result, it’s sometimes found clinging to tall people or to the walls of buildings! If you try to remove one against its will, you’ll be met with a sound punch.

Crabrawler’s favorite food is Berries. It punches the trunks of trees to give the branches a good shake and knock any ripe Berries to the ground so it can feast! Many Crabrawler may gather around a tree, but only the one that emerges victorious in battle against all the others receives the privilege of eating the ripe Berries.

Crabrawler uses its claws to protect its face and belly while getting in close to an opponent to throw punches. Its punches are powerful enough to split tree trunks! Crabrawler’s pincers are sometimes torn off during its bouts—and they are said to be delicious. 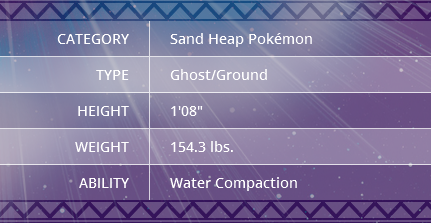 A Sandygast emerges when the grudges of Pokémon and other creatures soak into the sand after they fall in battle. In essence, it’s a possessed lump of sand!

If you heedlessly grab a Sandygast’s shovel, you’ll fall under the Pokémon’s control. A Sandygast uses its power to manipulate children into gathering sand to increase the size of its body. If a Sandygast loses its shovel, it may put up a tree branch, a flag, or another item in its place. These Sandygast are wanderers in search of their own shovels.

The tunnel-like mouth of a Sandygast can suck the vitality from people and Pokémon. Apparently it’s a test of courage in the Alola region to put your hand in a Sandygast’s mouth.

Sandygast has the new Water Compaction Ability, an Ability that no previous Pokémon has had. With Water Compaction, its Defense stat will go up by 2 if it’s hit with a Water-type move 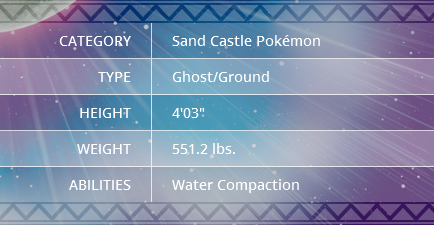 Palossand controls human adults, making them build a sand castle that provides camouflage and also raises its defensive abilities. Unlike Sandygast, if Palossand loses some of the sand from its body, it can restore itself on its own. When moving about in search of prey, the shovel on top of Palossand’s head revolves. It’s said that the shovel could be serving as some kind of radar.

Palossand loves the vitality of Pokémon and drags small Pokémon into its body so it can steal their life force. Its sandy vortex swallows them up in a heartbeat! Pokémon dragged into Palossand leave traces of their ill will behind. It’s thought that this negative energy may be the starting point of new Sandygast… 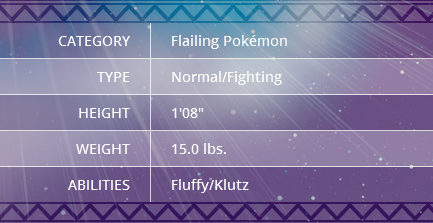 Stufful’s cute appearance and movements—plus the fluffy feel of its fur—all combine to make it super popular!

This Pokémon may have a small body, but its strength is extraordinary. Receiving one of its powerful hits without being prepared for it can bring down even well-trained Pokémon!

The truth is that Stufful doesn’t really like being touched. It hates being hugged tightly and will flail its arms in protest.

Here’s some artworks for those new Pokémon:

Here’s a recording of the opening ceremony of the Pokémon World Championships 2016, including Tsunekazu Ishihara’s speech. He introduces a new type of Pokémon that will appear in the first Pokémon Sun and Moon series for the TCG: Pokémon-GX. They are extremely powerful Pokémon, who can use an equally powerful move… but there’s a catch: players can only use such a move once per match!

And here’s a video introducing the Pokémon-GX: