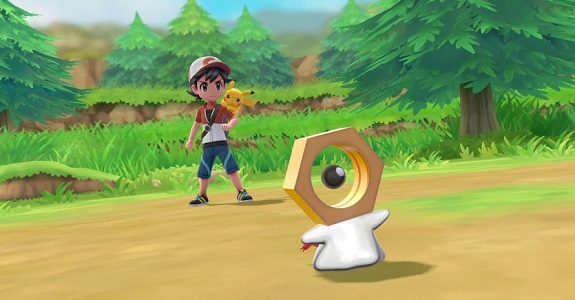 Today, The Pokémon Company shared some more details and about the mysterious new Pokémon, Meltan, revealed a few weeks ago via Pokémon GO and coming to both that game and Pokémon: Let’s Go, Pikachu! / Let’s Go, Eevee!. We also have several new videos showcasing this Pokémon!

And here’s a second video about Meltan:

Meltan may be pretty small, but he’s also surprisingly expressive. The one thing he loves is metal objects, and he will slowly moves its way towards any that it finds. It’s also pretty curious about its surrounding, and don’t be surprised if it starts doing whatever it pleases!

Also, The Pokémon Company revealed that the Mystery Box, in Pokémon GO, is tied to the mysterious Pokémon Meltan. In fact it’s key to catching that Pokémon in Pokémon GO. To receive that box, you need to send Pokémon from Pokémon GO to Pokémon: Let’s Go, Pikachu! / Let’s Go, Eevee!.

Sending Pokémon from Pokémon GO to Pokémon: Let’s Go, Pikachu! / Let’s Go, Eevee! allows you to get various items in Pokémon GO, including Candies for the species of Pokémon you sent. And the first time you do so, you will get a very special item… the very Mystery Box.

Meltan will only appear in Pokémon GO once that Mystery Box has been opened… but only for the player who opened it. No sharing boxes with other players! When you find one in the wild, just do the same thing you would for a regular Pokémon: touch it and try to catch it with a Poké Ball!

One thing to note is that the Mystery Box closes itself after it’s been used. You can open it again after waiting a set amount of time, and then send another Pokémon to Pokémon: Let’s Go, Pikachu! / Let’s Go, Eevee!. Also, you can get a Mystery Box for sending Pokémon to a friend’s game, but you will only be able to have one Mystery Box at a time.

Finally, in Pokémon GO, there will be Special Research tasks for players to complete, focused on Meltan. They will go live this Winter, and more details will be shared at a later date.