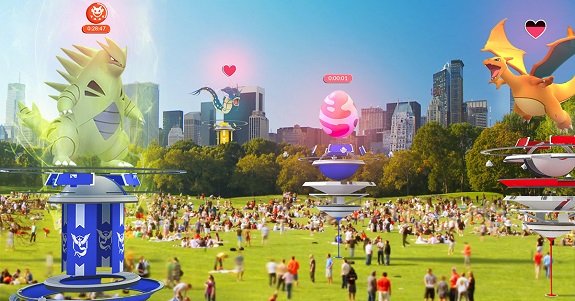 A few days ago, Niantic teased a major update for Pokémon GO, just in time for the Summer holidays. And today, the developers finally shared some concrete details about that update, which promises to be the biggest one for the game so far. It will provide revamped Gym gameplay, including the brand new Raid Battle feature.

Pretty soon, you will be able to spin the Photo Discs at Gyms, to get various items (just like you do at PokéStops). But this is pretty minor compared to the other changes coming soon.

For starters, Gyms will no longer be based on Prestige and training. Instead, there will be 6 permanent slots, that can be filled by the Pokémon of the team controlling the Gym. They all need to be unique, so you can’t have a team with only Charizards for example. Also, the opposing team battle each Pokémon in the order they were assigned to the Gym.

But the biggest change is the new motivation system. When a Pokémon is assigned to a Gym, a motivation meter is then displayed. As it’s defeated in battle, it loses motivation: this in turn makes it lose CP (albeit temporarily) and therefore makes it easier to defeat.

To defend your Gym, you need to keep your Pokémon motivated by giving it Berries. If you don’t, and your Pokémon loses all its motivation, it will leave the Gym and return to you the next time it loses a battle.

What’s more, Niantic is adding Gym Badges to Pokémon GO: you get them when interacting with the many Gyms all around the world. They basically serve as mementos of your adventures, and reflect your contribution to a particular Gym.

Those badges can be leveled up, which is done by battling, giving Berries to your Pokémon in the Gym, and spinning the Gym’s Photo Disc. In doing so, you will get the opportunity to receive bonus items and increased rewards from Gyms.

Another new major feature for this Pokémon GO update: Raid Battles, that take place at Gyms. They have you and other players team up in order to defeat an extremely powerful Pokémon… the Raid Boss!

However, there’s one catch regarding Raid Bosses: you need a Raid Pass to take part in them. You can get one free Raid Pass per day, by visiting a Gym, but you can only hold one at a time. Alternatively, you can buy a Premium Raid Pass from the in-game shop.

Defeating a Raid Boss allows you to get various rewards, including some exclusive items such as:

To prepare for this major update, Gyms have been temporarily disabled, and will be re-activated once the update has been rolled out to all players. After that, the Raid Battle feature will be “slowly” rolled out over the new few weeks, starting as a beta (with only a subset of players at certain Gyms being able to take part in them). After that, more players will be invitated, and Raid Battles will be enabled at more Gyms.

Finally, here’s some screenshots for this major update: