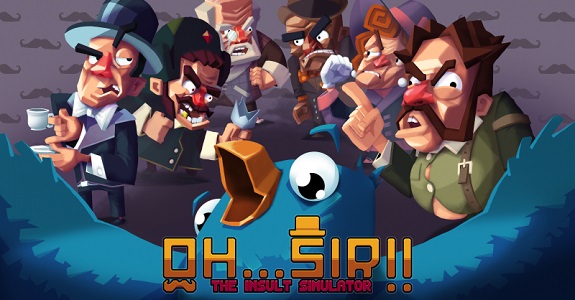 Oh… Sir! The Insult Simulator is pretty much what you’d expect from a game with such a name… or maybe not. It’s a “simulator”, where your goal is quite simply to insult and verbally abuse your opponents. Of course, it does not involve you taking a mic and shouting obscenities at other players, but instead you using various fun insults to make your opponents crack.

Take that old woman: why not tell her that her husband donated organs for a strange woman lying in a pond, and that her sister poses nude for some dog? That’s pretty much what this game is all about!

Basically, you come up with various insults by putting together sentences. But just insulting your opponent isn’t enough: you also have to chain insults to make combos, but also take advantage of your opponent’s weaknesses and insecurities.

Oh…Sir! The Insult Simulator can be played in Single Player, but you can also insult other players (or rather, their character) via the internet if you prefer!

Interested in this game? If yes, you will be delighted to learn that it’s releasing on Nintendo Switch pretty soon… next week, in fact! So far, it’s only listed on the Nintendo eShop in Europe, with a pretty neat price: 2.29€. It’s quite likely the game will also come out on the same day in North America, or shortly after/before.

Here’s a trailer and some screenshots (not from the Nintendo Switch version), as well as the list of key features for the game:

Oh…Sir! The Insult Simulator (Switch – eShop) comes out on January 18th in Europe, and later this year in North America. The Upcoming Games page has been updated