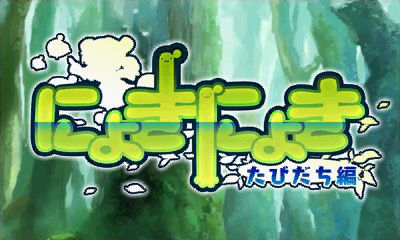 Masamitsu Niitani is a name you’ve probably never heard of before… unless you’re a diehard PuyoPuyo fan. Indeed, he’s the creator of the PuyoPuyo series, who now works at Compile○ (Compile Maru), a company he founded.

And today, it was announced that his new game would be released on Nintendo 3DS. Called Nyoki Nyoki Tabidachi Hen, it’s a Fighting-Puzzle game where players have to match “blocks” not just by colour, but also horizontally. With horizontal lines, you can build up attack power, which can then be activated at any time.

The game will feature several modes, including one called “2 colours vs 5 colours”: it provides a handicap for beginners, who can play against more experienced players.

Nyoki Nyoki Tabidachi Hen will be released this year on Nintendo 3DS, via the Nintendo eShop (where it will cost 800 Yen). It will be playable at BitSummit 4th this week-end, in Kyoto. Unfortunately, it’s way too early to know if there’s ever going to be an English release, in Europe and/or North America.

Our Upcoming Releases page has been updated! Also, check out the full line-up of Wii U / Nintendo 3DS titles at BitSummit 4th on this page!