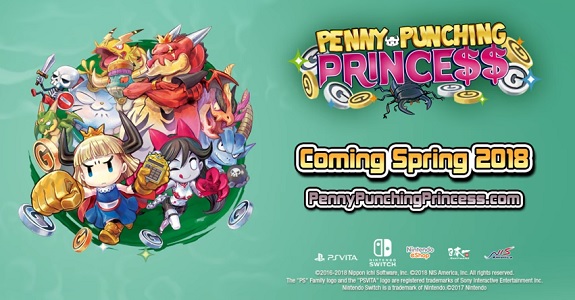 Yesterday, during its panel held on the very last day of the Anime Expo 2017, NIS America announced not one, but two new games for the Nintendo Switch: Penny-Punching Princess and The Longest Five Minutes, both releasing in Early 2018. What’s pretty interesting about them is that they are already available in Japan, but not on the Nintendo Switch: NIS America actually ported them specifically for the western release.

Penny-Punching Princess is a fast-paced brawler taking place in a world literally obsessed with money. You get to play as Princess, a girl who was robbed of her royal heritage. Your goal? Take on the mighty Dragoloan Family, and reclaim your kingdom. To do so, there’s no other way for you but to amass as much cash as possible.

Penny-Punching Princess (Switch) will be released on March 20th in North America, and March 23rd in Europe. The Upcoming Releases page has been updated!