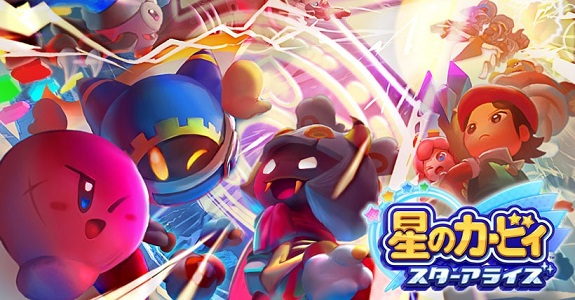 Today’s Nintendo news: trailer for the Heroes in Another Dimension mode for Kirby Star Allies, but also…

Today, HAL Laboratory shared a trailer for Heroes in Another Dimension, the extra mode that will be added to Kirby Star Allies on November 29th/30th via the 3rd major update (check out this post for more details about it):

Last week, it was announced that the preliminary matches for the online tournament section of the Splatoon Koshien 2019 will be held on December 22nd and December 23rd in Japan. The main tournament will then take place on January 13th.

And in Europe, the finals of the Splatoon European Championship 2019 will take place on March 9th and March 10th in Paris.

The latest piece of concept art for Super Mario Odyssey showcases Pauline, and more precisely her final design. Since that character has quite the history, the designer kept features from her original design and used them as base for the new design, that would fit in the new game.

The latest issue of Hobby Consolas reveals that in roughly 3 weeks, The World Ends With You -Final Remix- sold 3 900 units in Spain. That’s a somewhat respectable number compared to the original, that was at 20 000 units shipped in Europe after 6 months (but it wasn’t localised, unlike this Nintendo Switch version), but unfortunately, it’s nothing to write home about…

Quite interestingly, Luigi’s Mansion sold the same in roughly two weeks. Unfortunately, 3 900 units also isn’t anything to write home about, though one might say it’s not that bad for a Nintendo 3DS game in late 2018.

Here’s the recap video for Day 2 of Nintendo Live 2018 in Kyoto:

Here’s some pictures for the latest set of Fire Emblem merchandise in Japan:

Earlier today, it was announced that Lucretia’s first EP will be released on December 5th (for those wondering, Lucretia is a fictional singer introduced in the upcoming Raid Event for Dragalia Lost). It will feature the three tracks from the event: