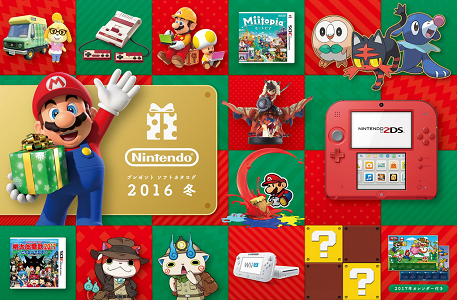 Just like last year, the Nintendo Present Software Catalogue is released as an eBook for Kindle (also available physically in stores). As the name implies, it’s a catalogue with all the (major) games games Nintendo is showcasing for the holiday period. There’s two versions:

Naturally, the “eBook” is available for of charge, and just like last time, there’s a special offer. If you download the catalogue, you can get a discount coupon to be used on Amazon:

The offer runs until January 9th, and the discount coupon has to be used before January 31st.

Today, Nintendo announced that the third Hanafuda workshop (where participants can learn to play this traditional card game, using the Mario Hanafuda sets) would take place on December 15th from 6.30PM to 8PM, at the NicoNico Headquarters. This time around, the workshop will be streamed live on NicoNico, so that even those who cannot attend in person will be able to check it out.

Today, Intelligent Systems shared pictures of the clear files given as free gift for all fans purchasing at least 8 packs of Fire Emblem 0 cards from December 8th (when the 7th series launches):