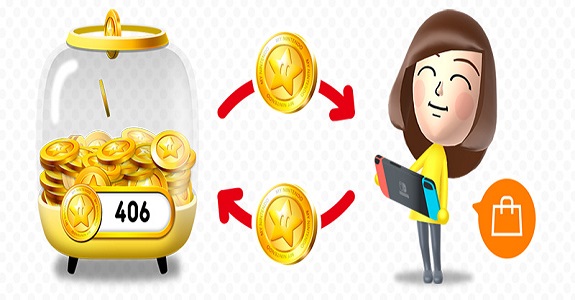 Update: you will be able to start using Gold Coins earned on My Nintendo to make purchases on the Nintendo eShop starting later today, on March 5th (North America) / March 6th (Europe, Japan).

Also, Nintendo Switch rewards are no longer listed as “Coming soon” on My Nintendo, which implies the new system basically replaces them entirely.

My Nintendo was launched back in 2016, and at first, the Platinum and Gold coins could only be used on Wii U or Nintendo 3DS rewards (as well as specific rewards for Nintendo’s various mobile games). After that, Nintendo began adding other types of rewards, such as wallpapers and calendars for PC and smart devices, but also discounts for My Nintendo Store items (only in Japan).

But even though the Nintendo Switch was launched almost a year ago, rewards for that platform are still MIA. Unfortunately, it doesn’t look like they’re coming any time soon, but at the very least, players will be able to use their Gold Coins on the Nintendo eShop of the Nintendo Switch starting next month (in early March).

Basically, you will be able to use Gold Coins when purchasing content on the Nintendo eShop of the Nintendo Switch, either via the console itself or Nintendo’s website. You will have the option to pay for the remaining balance with Nintendo eShop funds, or any other payment method available (credit card, PayPal).

In case you’re wondering: no, there’s no limit on the amount of Gold Coins you can use to purchase something, which means that if you have enough of them, you can totally get something for “free”!

NB: some content will not net you Gold Coins, though it’s not clear which ones yet
NB2: purchasing DLC on Nintendo Switch will only start netting you Gold Coins from early March (most likely at the same time as the “update” goes live).

And since you get the coins based on the total paid amount, you cannot get Gold Coins on the amount you paid using Gold Coins (unlike the Nintendo Network Premium programme on Wii U, where you could get money back on the money you got back).

One thing that doesn’t change is the expiration date of the Gold Coins: 12 months after they’ve been earned, and always at the end of a month (so if you get coins on March 12th 2018, they will expire on March 31st 2019).

Right now, it’s not clear what will happen to the My Nintendo rewards you can redeem using Gold Coins, since you will be able to get a lot more Gold Coins than before.