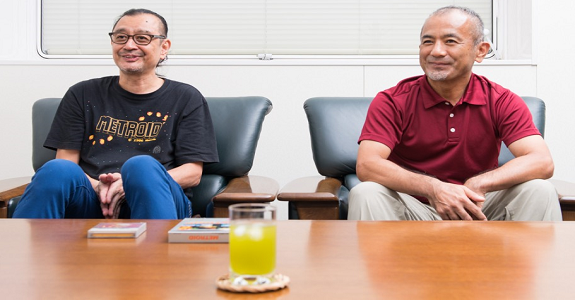 Ahead of the launch of the Nintendo Classic Mini: Family Computer, Nintendo published a series of official interviews with developers of some of the games included in the console. Only available in Japanese at first, they were then translated in English.

And yesterday, the 5th interview was published in English, and it’s about Metroid. In this one, Yoshio Sakamoto and Hiroji Kiyotake discuss this classic of the NES, which spawned one of the most unique of Nintendo series.

Here’s an excerpt (about the ending):

Once we entered the final stage of development, we started talking about having different endings depending on how long it took players to clear the game. We wanted to prepare a reward for people who cleared it more quickly.

We wondered what would surprise everyone and talked about removing Samus’ helmet.

Then someone said, “It would be a shocker if Samus turned out to be a woman!” And everyone thought that would be interesting and wanted to do it, so we decided it right away.

Yeah, we decided that in a flash. Back then, people played games over and over, so we wanted to give a reward for playing through quickly. Then we decided to put in four endings, with Samus removing her helmet or her suit and so forth.

As they played, everyone thought Samus was a tough, musclebound guy, but they learned in the end that Samus was a woman.

People who played it back then were shocked. And even now people talk about it like a kind of legend. (laughs)

Click here to check out the full interview for Metroid!