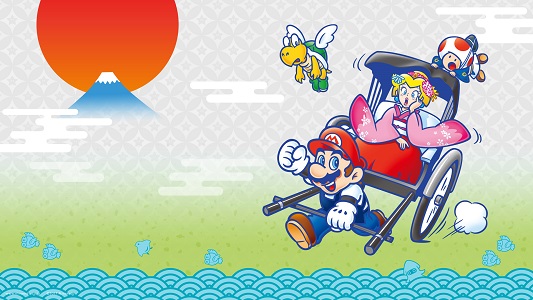 Today’s Nintendo and Daily Briefs (Round 2!) with Nintendo’s New Year wallpaper, but also…

On special occasion, Nintendo shares exclusive wallpapers with Nintendo Network ID (and then Nintendo Account) users. For New Year, Nintendo shared the following wallpaper, featuring Mario, Peach, and Toad. You can find it in several sizes on this page, but be quick: the wallpaper will only be available until January 31st!

Speaking of New Year, you can find ByteRocker Games’ message/illustration on Miiverse!

Today, Gory Detail shared a couple of new screenshots for The Unlikely Legend of Rusty Pup:

For Christmas, Erika from the Nintendo Lounge asked fans to share some pictures of Nintendo-themed Christmas decorations. Last week, they shared a montage of their favorite pictures:

And also for Christmas, Chris from the Nintendo Lounge asked fans to create and share some Christmas-themed levels in Super Mario Maker on Wii U. Unfortunately, they did not share pictures of said levels, but they did put up a list of their favorite levels so you can try them out for yourself:

Have you played Stone Shire recently? If yes, did you happen to fall through the world? Unfortunately, this is a glitch that found its way in the latest patch for the game. The good news is, the developer is already aware of it and working on a fix. Hopefully, it will be available soon enough, so that not too many players are impacted by it…