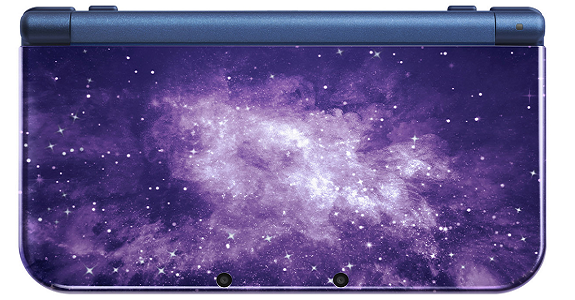 Back in August, Nintendo of America made a pretty unexpected announcement for the Nintendo 3DS: they revealed the New Galaxy Style model for the New Nintendo 3DS XL. But what was really surprising is that it was released on the same week as it was announced.

Back then, it wasn’t clear whether Europe and/or Japan would also get this rather neat looking New Nintendo 3DS XL model. But today, Nintendo announced that it would be released in Japan on November 11th. It will cost 20 302 Yen, which is… 2 Yen cheaper than the MSRP for a regular New Nintendo 3DS XL.

What’s interesting about the Japanese release is that the New Galaxy Style model will be available as part of the Galaxy Pack, which includes:

The New Nintendo 3DS XL Galaxy Pack will only be available via Toys R Us and Baby R Us (including the online stores), as part of the celebrations for their 25th Anniversary.

Here’s some pictures of the console itself, but also its packaging and the cleaning pouch:

The New Nintendo 3DS XL Galaxy Pack will be released on November 11th in Japan. It has already been added to our Upcoming Releases page!