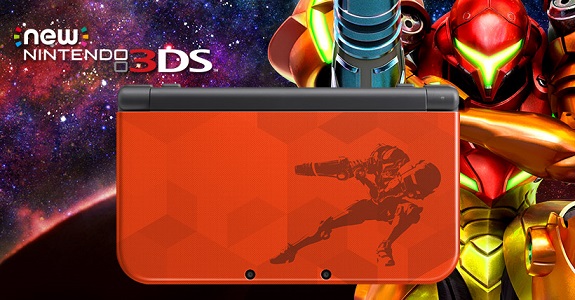 On September 15th, the 2D Metroid series will make its comeback with Metroid: Samus Returns. This remake/re-imagining of Metroid: Return of Samus (originally released on GameBoy) will be the very first 2D Metroid since Metroid: Zero Mission in 2004! And it looks like Nintendo is prepared to give a warm welcome to Samus for her grand return…

Today, it was announced that the game would get a Samus Edition New Nintendo 3DS XL in Japan,  North America, and Europe. It’s not a bundle or anything: you will only find the special New Nintendo 3DS XL in the box, and nothing else. In North America, the console will be available at select retailers, while in Japan, it will be a My Nintendo Store exclusive. It will cost 20 304 Yen.

Here’s some pictures of the console:

Nintendo also revealed the tracklist for the soundtrack album included with the Limited Edition of Metroid: Samus Returns in all regions:

Speaking of the Limited Edition for Metroid: Samus Returns, Nintendo is once again going to sell a game-less SKU in Japan, for players who just want the goodies (perfect for those planning to buy the download version, for example). Of course, it’s going to be a My Nintendo Store exclusive!

Finally, here’s some screenshots for the goodies unlocked thanks to the Metroid amiibo (make sure to check out this post for more details):

Metroid: Samus Returns comes out on September 15th worldwide. The Upcoming Games page has been updated!