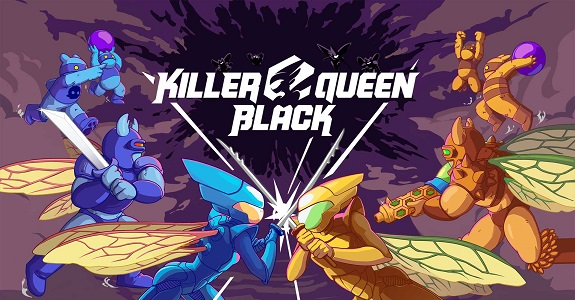 During the Nintendo Direct: E3 2018 presentation, Nintendo chose to introduce a few indie games, and Killer Queen Black is one of them. It’s actually a new take on the arcade eSport Killer Queen, releasing this Winter on the Nintendo eShop.

Never heard of Killer Queen before? Here’s what Wikipedia has to say about it:

The game is based on a physical game created by the same people. The game is designed to be played arcade-style by ten players in two teams of five. Two teams, each led by a powerful Queen, face off to be the first to bring the giant snail god home, fill their hive with nectar, or execute a triple assassination of the enemy Queen. It is the world’s only 10-player arcade strategy game.

And here’s the official description as well as some screenshots:

Killer Queen Black is an intense multiplayer action/strategy platformer for up to eight players.

Fly solo, or team up with three of your friends as you race to complete one of three possible victory conditions. Killer Queen Black, a new take on the arcade eSport Killer Queen, has been rebuilt from the ground up and optimized for console. The gameplay is immediately recognizable and familiar, yet it introduces exciting new twists and online play for the home audience. Killer Queen Black is the follow up to Killer Queen that fans have been begging for.