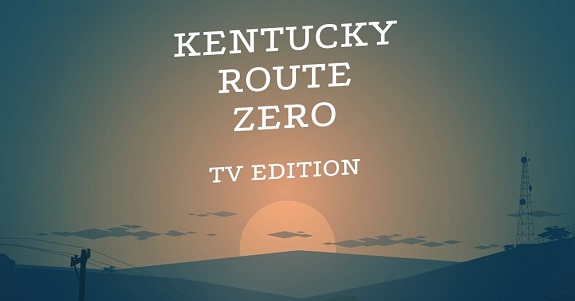 During yesterday’s Nindies Summer Showcase, various indie games were announced for the Nintendo Switch (and other Nintendo platforms), including some high-profile titles. Kentucky Route, the acclaimed adventure game, is one of them: it will be released on Nintendo Switch next year, as Kentucky Route Zero: TV Edition.

For those of you who never heard of it before: Kentucky Route Zero is a “magical realist adventure game” about a secret highway located in the caves beneath Kentucky, and the mysterious people who travel it. Gameplay is inspired by point-and-click classics such as the classic Monkey Island or King’s Quest series.

The difference with other similar games is that Kentucky Route Zero: TV Edition puts the focus on characterisation, atmosphere, and storytelling (instead of puzzles or challenges of skill).

An antique furniture delivery man trying to make his small shop’s last delivery gets lost along the way and meets a haunted TV repairwoman, a young boy and his giant eagle brother, a pair of robot musicians, and dozens of other characters. Together, they explore the nocturnal highways and country roads of Kentucky, the storied Echo River by fe rry, and the mysterious Route Zero, the secret highway that runs through Mammoth Cave.

Kentucky Route Zero: TV Edition will include all 5 episodes, but also the interludes.

Kentucky Route Zero: TV Edition (Switch – eShop) will be released in Q1 2018 in Europe and North America. The Upcoming Games page has been updated!