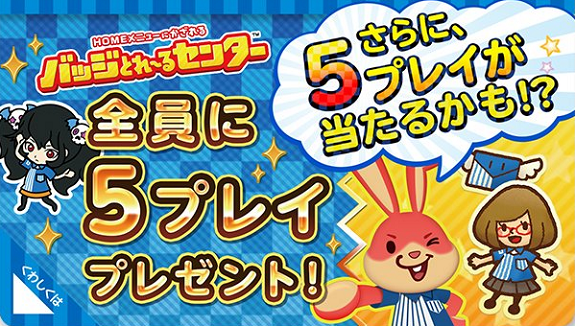 And today, Nintendo released another Nintendo Badge Center pre-paid card for the Nintendo eShop. Just like the previous one, it costs 1 000 Yen, and also comes with the 5 free plays. Here’s what it looks like:

Today, Konami announced that downloads for Yu-Gi-Oh! Saikyou Card Battle (on Nintendo 3DS) had topped 500 000 units. To celebrate, Konami is distributing Golden Tickets from August 9th to August 22nd. During that period, you get a Gold Ticket from the Guide every day, and Silver Tickets are also easier to get.

Also, Konami is distributing special codes via the official website (one per week), allowing players to get some rare cards.

Unfortunately, we still don’t know when the game will be released in Europe and North America (officially, it’s supposed to be released this Summer).

Here’s a commercial for Kamiwazawanda Kirakiraichibangai Kikiippatsu!, releasing on October 27th in Japan (on Nintendo 3DS):