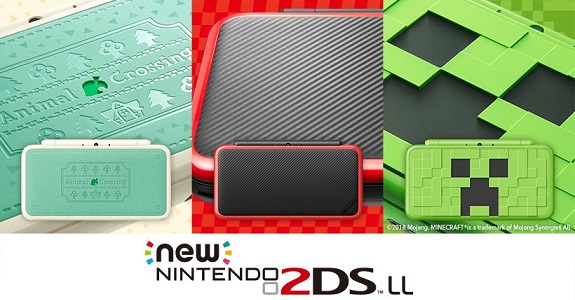 If you’ve been following the weekly reports about video game sales, you’re well aware that the Nintendo 3DS is pretty much finished in Japan. Hardware sales are generally 2 or 3 times lower than they were last year. Nintendo has pretty much left it on auto-pilot: it sells a modest but regular amount every week, but that’s it. And yet, the company announced announced not one, but 3 new New Nintendo 2DS XL models for this Summer!

The first one is called Minecraft New Nintendo 2DS XL Creeper Edition. It features a nice design inspired by the infamous Creepers, and it includes a copy of Minecraft: New Nintendo 3DS Edition (pre-loaded on the microSD Card). It costs 16 980 Yen + taxes, which is 1 888 Yen than buying the console and game separately. It will be released on August 2nd.

By the way, this will be the first time Minecraft: New Nintendo 3DS Edition will be available at retail in Japan, though the game itself will not come on a game card. So far, only North America has such a version of the game!

The second bundle is called New Nintendo 2DS XL Animal Crossing: New Leaf – Welcome amiibo+ Pack, and it features a pretty cute design inspired by the game itself. It costs 15 980 Yen, which is 1 916 Yen cheaper than buying the console and game separately. It will be released on July 19th in Japan.

Interesting fact: the design of the console is the same one as the special model releasing on July 20th in Europe… including the title, which was left in English on the console itself!

The third and final bundle is called New Nintendo 2DS XL Mario Kart 7 Pack, and it features a design… not really inspired by Mario Kart 7. It also costs 15 980 Yen, which is 3 571 Yen cheaper than buying the console and game separately. The reason it’s much cheaper is because Mario Kart 7 was not released as a Nintendo Selects title in Japan. The bundle will also be released on July 19th in Japan.