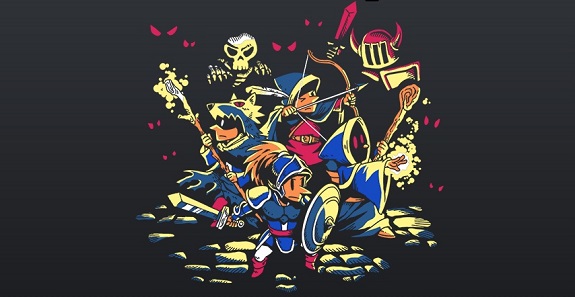 Remember the local co-op update for Cave Story+? Well, it’s finally ready, and will be released pretty soon… this Friday, actually! As announced previously, co-op is for 2 players, and is local-only (no online):

More details about Cave Story+ updates can be found on this page!

Here’s a pretty important detail about Uurnog Uurnlimited that we somehow managed to miss from the initial announcement: the game is getting Steam Workshop support… on Nintendo Switch. Players will be able to download maps created by PC players on Steam thanks to the Steam Workshop level editor, though that feature will not be available at launch….

For more details about Uurnog Uurnlimited, make sure to check out this post!

Uurnog Uurnlimited (Switch – eShop) does not have a release date.

Ready for some roguelike action on your Switch? Quest of Dungeons launches in a few days Sep 14 #NintendoSwitch #nindie #screenshotsaturday pic.twitter.com/yo8et6mVAD

Here’s one new artwork for SteamWorld Dig 2, releasing on the Nintendo eShop of the Nintendo Switch on September 21st!

Last week, Inti Creates announced that the Nintendo 3DS version of the original Azure Striker Gunvolt had been downloaded over 250 000 times since launch (Nintendo eShop only, excluding the Striker Pack). A pretty good result for Inti Creates, especially as the game is still selling a steady amount to this very day!

Did you miss the Nindies@Night presentation, on August 30th/31st? The full recording is now available on YouTube!

Also, check out this post for all the Nindies announcements from PAX West!

Last week, QubicGames announced that Robonauts would be released on September 15th (this Friday) in North America. Unfortunately, it looks like European players will have to wait a little bit longer…

Here’s one screenshot for the game:

Robonauts (Switch – eShop) comes out on September 15th in North America, and later this year in Europe. The Upcoming Games page has been updated!

Last week, Frozenbyte posted their latest Monthly Report on their official blog: you can check it out by clicking here! Unfortunately, it doesn’t have anything really exciting, as it’s mostly a report on recent events they attended (gamescom, PAX West).