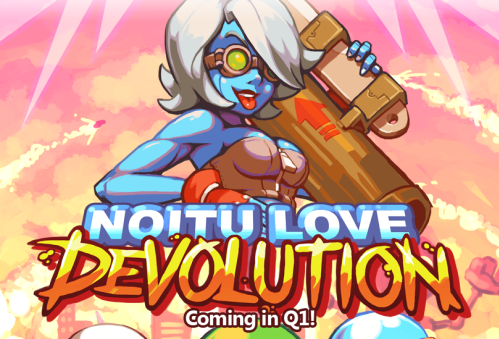 Last year, we learned that Noitu Love: Devolution was coming both to the Wii U and the Nintendo 3DS (courtesy of MP2 Games). A few days ago,
Mathias Kærlev announced on Twitter that the Wii U version has been submitted to Nintendo, and that the Nintendo 3DS version should follow before the end of the month. They are expected for March and April respectively, but we will have to wait a bit longer before getting a proper date.

6180 the moon is a unique platform, which was made even more unique for the Wii U. Yesterday, the developers (Turtle Cream) revealed a trailer for this version of the game, which shows some gameplay footage proper. We get to see that both screens (TV and GamePad) are used, and the player needs to switch from one to the other in order to progress through the levels.

Turtle Cream announced that the game would launch on February 25th in Europe (including Australia) and North America. The game does not support Off-TV play (for obvious reasons), and will cost $3.99 at launch (just like the other platforms it launched on).

Dumpster Dive is an endless runner that was originally released on Android and iOS. Yesterday, Cody Diefenthaler (Chuchud Industries) announced on Twitter that the game would be ported to Wii U and Nintendo 3DS:

I'm gonna port Dumpster Dive! to #WiiU and #N3DS. Any #Nindies punks out there?! https://t.co/gPUrGiHWry

He also mentioned a New Nintendo 3DS version for Temple of Yog, currently available on Wii U in Europe and North America.

Yesterday, Nnooo posted the following animation, introducing one of the enemy types in Blast ’em Bunnies: the Walker.

Time to meet the first of the evil bunnies. Out soon on #3DS #PS4 #PSVita #XboxOne#BlastEmBunnies #BunniesofBEB pic.twitter.com/gSsDbUhEsh