Today, Fire Emblem: Three Houses was showcased on Nintendo’s booth at the Japan Expo 2019 in Paris. Toshiyuki Kusakihara (Intelligent Systems) and Genki Yokota (Nintendo) were both in attendance in order to share some additional details about the game, along with more footage.

Here’s the recording of the presentation:

Nothing really new was shown/revealed during the presentation, but we did get a few additional and/or interesting tidbits. First, we learned that the Fodlan Continent is nearly 2/3 the size of the European continent. The game is mostly about the three main countries (Adrestian Empire, Holy Kingdom of Faerghus, Leicester Alliance + Church of Seiros), but characters from other countries will also show up.

It was also explained that in the past, neighbouring countries tried to invade the Fodlan Continent many times, and that’s one of the main reasons that led the three countries to stop their wars and enter an alliance around the Church of Seiros.

As mentioned in this report, you can scout characters from a different class than you chose at the beginning, but you need to meet the requirements to do so. When you don’t, you can simply ask a student to assist your class: when you do so, they will join, but only for a month.

During your free time, you can walk around the Garreg Mach Monastery, and talk to the various characters. If you’re looking for a specific student, you will be able to search for them easily, as the game allows you to see the list of characters currently found in a given area of the Monastery. You won’t have to run around and look everywhere to find them.

As mentioned on the official website, Fire Emblem: Three Houses is compatible with amiibo figures. If you tap a compatible figure, you can get items and various rewards. During the presentation, it was revealed that amiibo figures of Fire Emblem characters unlock an iconic music track from their respective game, that you can use as BGM in free battles.

Next, we got some details about giant enemies that you will sometime encounter in battle. Those can take from 4 to 6 cases, and are really dangerous. It’s pretty important to use strategems against them.

The developers explained that they had been interested in implementing such enemies for a while now, and they were able to do so in Fire Emblem: Three Houses. It took quite a lot of testing for them to find the right balance, though.

Finally, we got a look at some concept art for the 3 main characters. The design for Edelgard changed quite a bit from the initial designs, meanwhile those for Claude and Dimitri didn’t change much. In fact, the one for Claude is the one that went through the least amount of iterations. As for Dimitri, he first looked rather chic and elegant, but he was made more heroic. 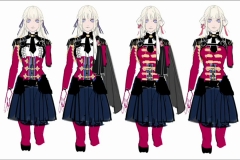 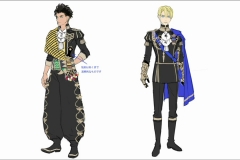 For more details about the game, make sure to check out the following translated interview: