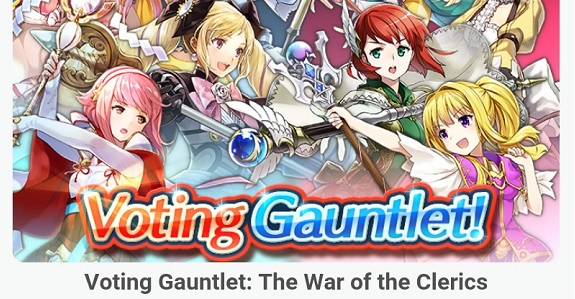 Update 1: the event is now over! Don’t forget to claim your various rewards! (NB: the Grand Rewards will be available later).

Today, the 4th Voting Gauntlet for Fire Emblem Heroes was announced, called “War of the Clerics”. As the name implies, it pits various clerics against each other. It will take place from June 27th to July 3rd.

With this 4th Voting Gauntlet, rules have once again been modified. Now, the bonus your army gets when it’s at a disadvantage increases over time (up to x 7.5, the max. value). The multiplier is (3.1 + duration x 0.1 Also, some quest content has change, but we don’t have any other details about that for now.

The more you battle, the more rewards you will get. Keep in mind that the “losing army multiplier” also applies to your own score, so make sure to vote when your army is losing, to rack up points like crazy!

The overall voting score will be announced after the event ends (on July 3rd). The Grand Rewards will be distributed to Fire Emblem Heroes players as a special log-in bonus.