March is finally there, which means it’s finally time for the next Software update for Fire Emblem Heroes! Ver. 3.3.0 will be released in early March, most likely next week (by March 8th). Official patch notes will be added to this page as soon as they’re available.

Here’s a quick rundown of what this new update brings:

Starting with this version, each Hero will be able to transfer up to 4 skills to another Hero, instead of 3. And… that’s pretty much it! 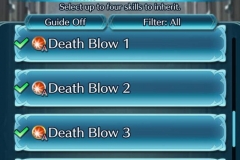 When deployed, Dark and Anima Mythic Heroes provide an Aetheric Lift loss-reduction. Starting with Ver. 3.3.0, that effect will be slightly strengthened. Here’s an example with Duma (God of Strength):

(Number of Mythic Heroes (Max: 2) x the number of Heroes with the blessing conferred x4)

(Number of Mythic Heroes (Max: 2) x the number of Heroes with the blessing conferred x5)

However, the way Mythic Hero merges impact this effect is not changing.

This change will take effect with the new Season starting on March 12th, which means there will be a few days with the old values after the update has been released.

What would a Software update for Fire Emblem Heroes be without the usual set of new Weapon Skills and Weapons to refine? Ver. 3.3.0 will add the following character-specific skills (learnable at 5 ★):

You will be able to summon the following Heroes via Heroic Grails:

As usual, you can find the complete list of Heroes available via Heroic Grails on this page!

Finally, Ver. 3.3.0 will provide some welcome Quality of Life improvements to the Equip Seals screen: 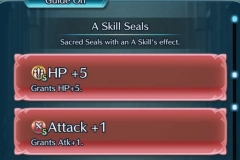 And that’s pretty much it for this update! As usual, keep an eye on the Events and Content Updates and Characters pages to keep up to date with all that’s happening in Fire Emblem Heroes!