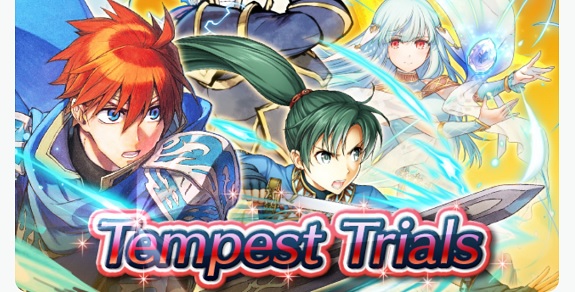 Today, it was announced that the first Tempest Trials Mini event for Fire Emblem Heroes would go live on Friday. “What’s the difference with regular Tempest Trials”, you ask? Well… not much! It’s the exact same thing, with one noticeable difference: battles are a “bit easier than usual”, and the event itself is shorter. It’s also easier to get rewards, and you can receive rewards you have already received.

The first Tempest Trials Mini event is called “To Die on the battlefield”…, and will be live from September 8th to September 15th. You need to download the latest update in order to take part: click here for more details!

By the way, there is also a set of Daily Quests to tackle each day during this Tempest Trials Mini event. More details can be found on this page!

Here’s the rewards you can claim during this second Tempest Trials event:

And here’s the bonus Heroes for this first Tempest Trials Mini event (some of these are available in a Summoning Focus!):

What are Tempest Trials?

Tempest Trials are a kind of events for Fire Emblem Heroes. You get to challenge a series of high-difficulty maps, in order to get rewards. You can clear them repeatedly, which allows you to increase your score. This is pretty important, because the rewards you get depend on that very score! You can access Tempest Trials via the Battle section of the app.

When you have cleared the final map of a session (which is always a boss battle), you can get your points. That score is based on your overall completion, and increases for the number of maps cleared, speed, and ally survival. Don’t worry if you happen to fail: you will still get a lower score based on the number of maps cleared, but naturally, if you want the highest score possible, failure is not an option!

You can check out the rewards available during this Tempest Trials event above!

One thing to keep in mind is that you also receive a ranking based on your cumulative score, and there’s some additional rewards you get based on that very ranking. Also, the first two times you challenge the Trials every day, you can triple you score… make sure you don’t waste this opportunity by failing, ok?

Also, just like in the Arena, there’s Bonus Allies that you can use to increase your score. All you need is to have just one of those go into battle at least once, and you will get the bonus. There’s two tiers, giving you a different bonus depending on the Heroes used (+20%, 40%). Do note that you cannot stack the bonuses by using multiple Bonus Allies: only the one giving you the biggest bonus will be kept.

And this time around, Bonus Heroes also get HP+10 and Atk/Spd//Def/Res+4, as well as double EXP and SP. You have even more reasons to use one!

Finally, if you don’t feel like playing, you can now use the Continuous Auto setting, in order to have your team battle automatically until it wins… or loses (click here for more details).