Team17 have announced that Neon Abyss will be released on July 14th.

Never heard of Neon Abyss? Well – it’s a frantic roguelike that lets you run and gun your way through an ever evolving dungeon! Descend into the abyss, blast your way through monsters, upgrade your weapons and battle the new gods that inhabit boss rooms! Each death is simply a step forward as you unlock more items, mini game rooms, characters and even extend the length of your dungeon runs!

Following the orders of Hades himself, players will have to work through rooms filled with enemies to dispatch and mini-puzzles to overcome, in a bid to overthrow the Gods of Fast Food, Mobile Video, Plushies, and more. Featuring hundreds of items to collect and pets to hatch and evolve, when the inevitable occurs and players fall to defeat they will come back stronger and more prepared than ever before to once again face what awaits in the Abyss.

Neon Abyss (Switch – eShop) comes out on July 14th in Europe and North America. The Upcoming Games page has been updated!

Here’s the latest trailer and the latest set of details for Alwa’s Legacy:

After saving the land of Alwa following the events of the first game, Zoe is about to embark on her quest home. However, upon waking up she finds herself at the beginning of her adventure with the world feeling disparate yet familiar. In order to return home, she will need to help the inhabitants of this mysterious land and save it yet again from the mysterious curse it appears to be under.

Using Zoe’s magic staff, players must negotiate the land of Alwa to solve perilous puzzles and fend off monsters. New items and a character upgrade system allows you to craft your individual playstyle, centred on an offensive, defensive or explorative skillset. Using magical upgrades, novel pathways can be found as you explore the nonlinear interconnected world by summoning blocks to climb on, bubbles to bounce off of, and lightning bolts to attack with. Quick reflexes are needed to traverse challenging rooms while avoiding booby traps and pitfalls. Along this adventure, you will meet all manner of interesting characters, comb through dangerous dungeons, and uncover incredible secrets as you attempt to save the land from extinction.

Alwa’s Legacy (Switch – eShop) does not have a release date yet.

Ratalaika Games have announced that Spacejacked will be released this Friday (June 12th) in Europe and North America.

Here’s one, lone screenshot for the game: 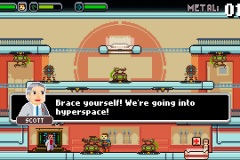 Spacejacked (Switch – eShop) comes out on June 12th in Europe and North America. The Upcoming Games page has been updated!