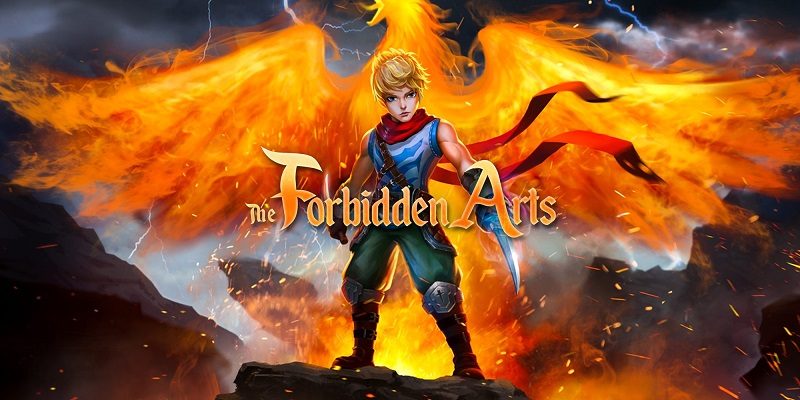 Stingbot Games have announced that The Forbidden Arts will be released on August 7th in Europe and North America. It will cost $14.99 at launch, but you can get a 15% off discount if you pre-purchase it on the Nintendo eShop. The following language options will be available: English, French, German, Spanish, Brazilian Portuguese, Simplified Chinese, Korean, Hungarian, Russian, Japanese, and Italian.

Explore a magical world where secrets are hidden around every corner. Lead Phoenix, a young man who discovers the flame within and embarks on an adventure to learn more about himself and his greater purpose in life while fighting off an evil greater than any the world has ever known.

Inspired by both western and eastern cultures, Phoenix’s world, Chora, possesses a diverse set of biomes including snowy fields, dim caverns, giant beehives, treacherous swamps and more. The Forbidden Arts combines suspense and comedy in a remarkable narrative illustrated in a vivid art style and set to the melodic sounds of an acoustic guitar.

The Forbidden Arts (Switch – eShop) comes out on August 7th in Europe and North America. The Upcoming Games page has been updated!

No More Robots have announced that Descenders, the mountain biking game by RageSquid, is coming to the Nintendo Switch at the end of the year.

Descenders is extreme downhill freeriding for the modern era, with procedurally generated worlds, and where mistakes have real consequences. Will you lead your team to glory and become the next legendary Descender?

Descenders (Switch – eShop) will be released at the end of the year in Europe and North America. The Upcoming Games page has been updated!

A Rat’s Quest – The Way Back Home

HandyGames have announced another game for the Nintendo Switch: A Rat’s Quest – The Way Back Home. It will be released in 2021 in Europe and North America.

A Rat’s Quest – The Way Back Home is a Romeo and Juliet-esque story, about a rat and a mouse. Mat, the hero of the game, is trying to find a way to his beloved Nat, a fearless mouse being kept as a pet. Together, they’re planning their escape to freedom: the outside. But beware – this journey is full of dangers, one of them being “THE CLAW”!

Experience a giant’s world from the perspective of our tiny hero, Mat the rat. For you and me, an old closet is only that- but for Mat, it’s a towering dungeon with the promise of adventure! Play hide and squeak with fearsome creatures and slash them with your shiny rivet or fend them off with your sturdy button!

A Rat’s Quest – The Way Back Home (Switch – eShop) comes out in 2021 in Europe and North America. The Upcoming Games page has been updated!

Merge Games have announced that Solo: Islands of the Heart will be released on August 1st in Europe and North America.

Lonely Mountain: Downhill (Switch – eShop) does not have a release date yet.