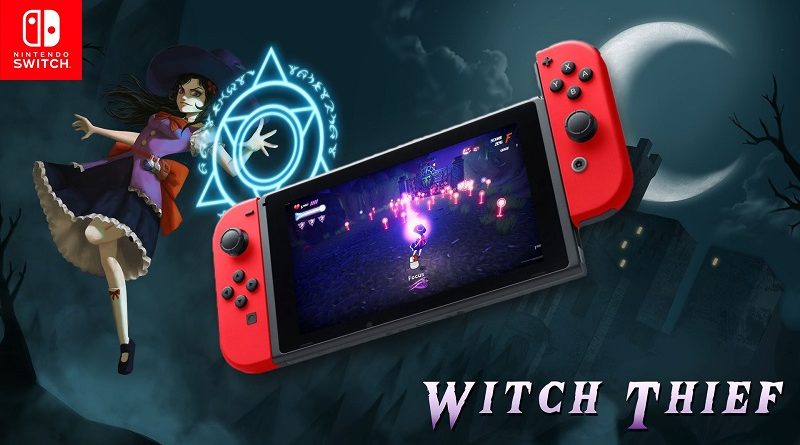 Here’s a trailer (from the PC version), some details, the list of key features, and some screenshots:

On a quest to steal an enchanted grimoire, a snarky sorceress embarks on a dangerous journey through five distinctive, perilous zones, surviving arena-based ambushes by possessed dolls and arcane bosses. Naturally the tome’s guardians won’t give it up without a fight, so our heroine must do what she does best: that is, sneaking in the front door and stealing it from under their noses.

Players can unlock three more playable and equally feisty witch heroines with different powers, each with a personal story told through unique dialogue, entwined inextricably with the Witch Thief’s own tale.

‘We focused on bridging the gap between hardcore shmup and a more relaxed, story-driven experience. On the tougher difficulty levels, this will tax the most ardent bullet hell fans – but drop into “Chill Mode” and it’s a blast for players who want to explore the witches’ stories while developing their skills,’ explains Tim Bermanseder, co-founder, Cardboard Keep and project lead on the game.

Each witch has her own reason for seeking the ancient grimoire, and players will experience journeys of redemption, betrayal, bravery, wisdom, corruption and possession in their hunt for the charmed tome – and the mysterious doll maker…

Witch Thief (Switch – eShop) comes out on April 19th in Europe and North America. The Upcoming Games page has been updated!

Here’s the latest trailer, some more details, and some screenshots for Fromto:

Fromto results quickly in hilarious fun, laughter and yelling because so many random unforeseen and crazy impossible things will happen: After all players collected their vehicle of choice by foot in a short mini-game-like-lobby, they will start the first phase in a quite wild, but pre-set level. All players try to first reach a checkpoint and then the finish line. But this probably won’t happen in the first attempt, it’s more for checking out the level.

After all players finished their try, the magic happens in the second phase: All the little cars turn into helicopters and you’re going to collect different, randomly dropped crates which contain new track parts to place in the pre-set level: This can be helpful things like new platforms, ramps and jump pads or hindering elements such as obstacles and traps for your opponents, or just fun things like a cannon that shoots small bubbles of glue.

In addition to those random pieces, there is a shop for every player where you can buy even more ‘helpful’ things with points earned by performing stunts. Overall, there are more than 50 different parts that can be placed. A time limit will stop your creativity after 60 seconds and the next round will start.

All of this comes with a very special art style, as the game was created by the developer and contemporary artist Erik Habets, together with his two kids Niki (5) and Joep (2). Do not be mistaken, although the game might look childish, Fromto is not only for the young ones. This is a game for kids from ages 8 to 108 – and specifically for the grownup kids (and influencers)!

Fromto (Switch – eShop) comes out this Fall in Europe and North America.

Here’s a video clip for Stranger Things 3: The Game: