Digerati have announced that the Nintendo Switch version of Underhero has been delayed to February 27th, in order to ensure that a patch fixing various issues is available at launch. It was initially slated for a February 13th release.

Underhero (Switch – eShop) comes out on February 27th in Europe and North America. The Upcoming Games page has been updated!

Nintendo Switch On The Go

Similar to what already exists at the Kansai International Airport in Japan, Nintendo of America have announced that Nintendo Switch On The Go pop-up airport lounges are coming to various airports in the United States (starting from February 13th).

There, travelers will be able to try out the Nintendo Switch (TV and Handheld Mode) and Nintendo Switch Lite, as well as their games, but also make use of charging ports, and more. Games playable include:

What’s more, travelers will also be able to order the console, and will get a free carrying case as bonus. Select games and merchandise will also be available for purchase. And even travelers who don’t buy anything get some freebies:

Here’s the schedule for the lounges: 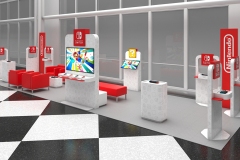 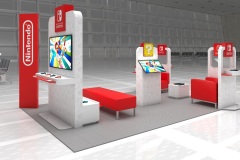