American Junior Youth? A team that has great physical strength with talents who were greedily gathered and have been trained through the latest technologies and trainings. Most of the players are from the soccer school that Cardinal established.

Yesterday, Indivisible was finally released on Nintendo Switch (via the Nintendo eShop), to the surprise of absolutely everyone… including the developers and the publisher! Lab Zero have shared a message explained exactly what happened (basically, the game was initially delayed to early May so that the Day 1 Update would be ready in time, but delay wasn’t taken into account by the release tool): click here to check it out!

As announced a few weeks ago, the Nintendo Switch version of Yooka-Laylee has been updated today, adding the Yooka 64 model from Yooka-Laylee and the Impossible Lair. 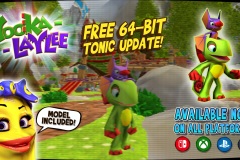 Yacht Club Games have shared the complete cheat database for all the games in the Shovel Knight: Treasure Trove collection: click here to check it out, and get more details about the cheat codes themselves!