Today’s Daily news: official FAQ for Moving Out, but also…

With less than two weeks left until release, Team17 have shared an official FAQ for Moving Out. It answers various questions about the game, such as the price, pre-order bonuses, difficulty settings, and much more. Click here to check it out!

Here’s the latest trailer for Warborn:

Warborn (Switch) comes out on June 12th in Europe and North America.

After the Game Developers Conference 2020, E3 2020, BitSummit, and many others, yet another major gaming event is impacted by the Covid-19 pandemic: gamescom 2020. Due to Germany imposing a complete ban on major events until the end of August, the event has been canceled. It will be replaced by some sort of digital event, with details to be shared at a later date.

Here’s the message from the organisers: 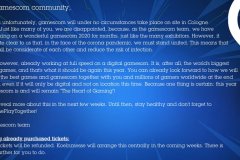 The latest set of translated interviews from shmuplations is all about Front Mission. Click here to check them out!

This collection of interviews chronicles the creation of the Super Famicom strategy-RPG Front Mission, a game published by Square in 1995 to critical acclaim and one that continues to receive sequels and followups in various genres to this day. Developed in partnership with Toshiro Tsuchida’s now-defunct studio G-Craft, the developers discuss the game’s hard sci-fi setting, the collaboration between G-Craft and Square, stepping outside of Square’s usual fantasy wheelhouse and the process of sanding the edges off an unabashedly hardcore game.

Here’s the teaser trailer for the new edition of Fort Boyard: