FUZE4 was initially slated for a 2018 release, before being renamed and moved to April 1st. Unfortunately, it looks like there’s going another delay, this time to May 31st. In a video uploaded yesterday, the developers explain that they keep adding new improvements to the game, and they clearly need some extra time to make sure the Software is as good as possible when it’s finally ready for release.

Here’s the video message from the developers, which also features some footage of the Software:

FUZE4 (Switch – eShop) comes out on May 31st in Europe and North America. The Upcoming Games page has been updted!

Heads up for players with the Japanese version of Sinner: Sacrifice for Redemption: the latest Software update for the game, which adds New Game+ (among other things) is now available in Japan. Make sure to check out this page for more details about the update!

Here’s a picture for the latest set of DLC for WorldNeverland – Elnea Kingdom, now available worldwide: 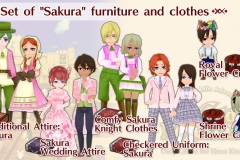