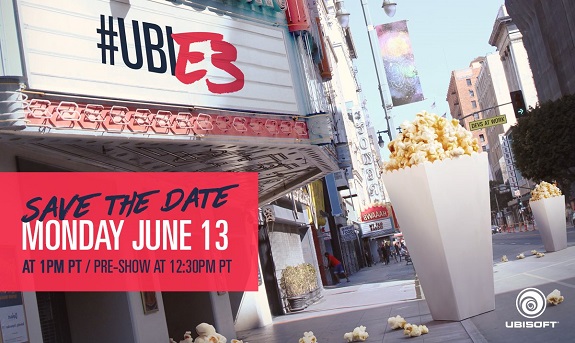 Last year, Nintendo platforms were pretty much ignored during Ubisoft’s press conference (not too surprising given the current state of third-party support on Wii U and Nintendo 3DS from western developers, including Ubisoft). But this year might be different, as Nintendo is expected to unveil its NX platform within the next couple of months. Will we get to see games for the NX platforms during Ubisoft’s press conference? Maybe!

The press conference will take place on:

If you live in the UK, you can get some convenience store items for Animal Crossing: Happy Home Designer via Nintendo Zone at GAME stores across the country:

[News] Filly is back in Nintendo Zone at @GAMEdigital until 31/05, bringing items to #ACHappyHome. pic.twitter.com/6Ihjm5CE6l

Yesterday, Atlus released the latest batch of DLC for the second wave of additional content for Shin Megami Tensei IV Apocalypse in Japan. The company also announced that the various early purchase and retailer bonuses would be released as DLC on May 21st: This week, the Real Escape game based on the Zero Escape series opens in Los Angeles. If you’re planning on going yourself, or if you’re simply curious, you can check out this article by Gamasutra, who had the opportunity to talk with Tamami Kawakata (escape room designer) about how it was designed!

On Wednesday, Game Informer published an interview with Masashi Takahashi (Co-Producer) about Bravely Second: End Layer. It covers various topics, such as fan feedback, whether players need to play Bravely Default first, what games the team looked to for inspiration, why the characters look more proportionate this time around, and more. Click here to read it!

Talking of Bravely Second: End Layer, here’s another trailer for it:

This week, Circle Ent. announced that the Nintendo 3DS version of ASH (a JRPG) had passed lotcheck at North America, and that they were planning a release date right about now. We should hear more about that game in the very near future! Also, they asked players if they’d be excited if one of the two JRPGs they mentioned a while back was Oukoku no Douguya-san… suspicious!

Here’s various Kirby: Planet Robobot goodies, which will be available at Kiddy Land from April 28th to June 10th: Here’s some more gameplay footage for Mario & Sonic at the Rio 2016 Olympics on Nintendo 3DS, courtesy of CoroCoro magazine:

Here’s the latest cards from the 4th series of Fire Emblem cards (which came out last month in Japan), along with the four promotional marker cards to be distributed at in-store events next month: Talking of Fire Emblem 0, here’s the cover of the 4th edition of the official Fire Emblem 0 card, with the latest rule sets, list of cards, and more. It comes with a promo card (the latest one for Series 4):