It’s that glorious time of year again in the Onion Kingdom, the snow Is falling, the presents are wrapped and the fire’s crackling…Wait, no, that’s just another kitchen fire.The kingdom has been transformed into a magical and mouth-watering wonderland, with five new Christmassy kitchens for your festive fiascos! You can expect new chefs and recipes under the tree this Christmas!

Pillars Of Eternity II: Deadfire (Switch – eShop) comes out next year in Europe and North America. The Upcoming Games page has been updated!

Rico (Switch) comes out next year in Europe and North America. 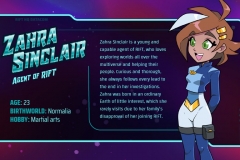 Here’s the recording of the segment dedicated to Onimusha: Warlords from the latest episode of Denjin Getcha:

Onimusha: Warlords (Switch) comes out on December 20th in Japan, and January 15th in Europe.

Daedelus: The Awakening of Golden Jazz

Here’s the recording of the segment dedicated to Daedelus: The Awakening of Golden Jazz from the latest episode of Denjing Getcha: