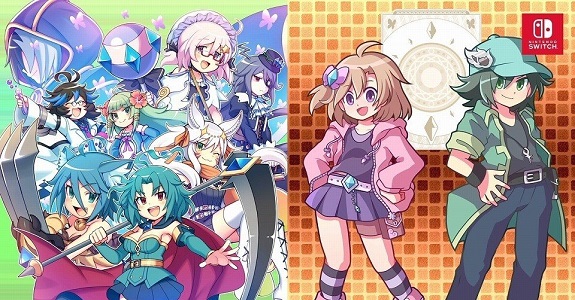 Back in May, we found out that INSIDE SYSTEM was bringing Brave Dungeon + Dark Witch Combat, an enhanced port of Brave Dungeon (originally released on Nintendo 3DS, last year). And today, the company announced that it would be released pretty soon in Japan… next week, in fact (on September 28th).

In this version, Brave Dungeon gets two “new” characters: Klinsy, and Neville from the upcoming Legend of Dark Witch 3, that can now be selected as party members. The game is now in HD, with significantly improved visuals (we’re going from 240p to HD, after all!).

As for Dark Witch Combat (a mini-game accessible from the main menu of Brave Dungeon), here’s what we wrote about it back in May:

The battle system in this mini-game is a bit special: battles are automated, and all you can choose is your character and equipment. The developers explain that players will be able to acquire new characters via a gacha mini-game (using the in-game currency, not actual money).

As the name implies, Dark Witch Combat is a battle game featuring various characters from the Dark Witch series. But what is not obvious is that it’s actually a card-like battle game, where you get to send 3 characters in battle. To win, there’s various things to take into account: the strength of the characters you picked, but also their strengths and weaknesses. You can also use magic items and special abilities.

As mentioned last time, the game features a story mode called “Quest Mode” (for one player), and a Battle Mode (for two players, VS).

Brave Dungeon + Dark Witch Combat (Switch – eShop) comes out on September 28th in Japan, and will cost 864 Yen. The Upcoming Games page has been updated with this new date!